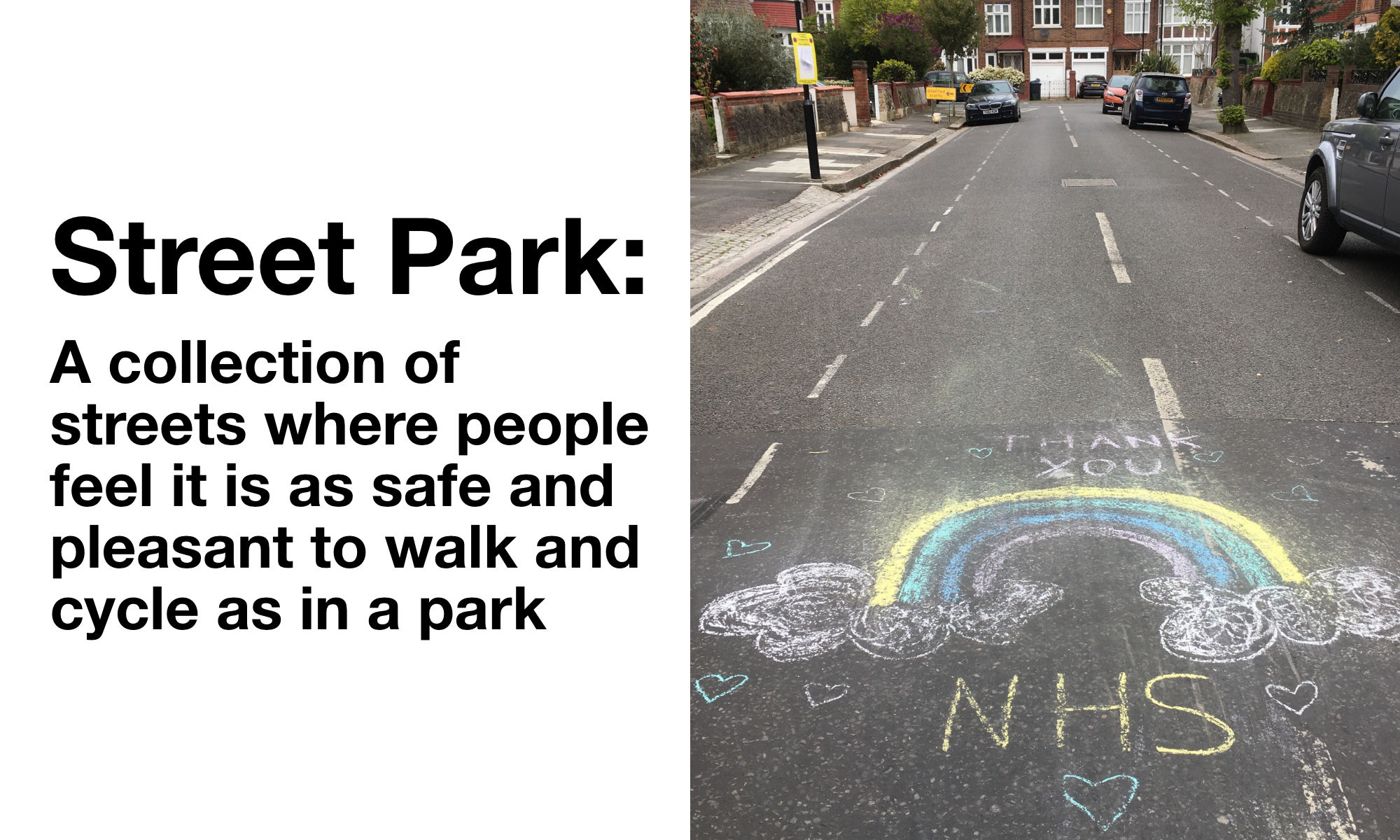 One of the few benefits of lockdown has been the quietness of the streets in my neighbourhood. Without motor traffic, people thronged into them as never before: families walking and cycling, teenagers skateboarding, children on scooters – all enjoying the empty roads. As the buds on the trees burst into leaf, and the spring air filled with birdsong, it seemed as if the area had become a park. Wouldn’t it be wonderful, I thought, if we could keep this when lockdown ended. Would it be possible to create a ‘Street Park’: a collection of streets where people feel it is as safe and pleasant to walk and cycle as in a park?

While I was mulling this over, in mid May, Transport for London launched Streetspace for London – a programme to create more space on roads so people can walk or cycle while social distancing. Looking at the documents TfL posted online, I saw it had carried out some impressive research. Among the maps was one showing areas of London, marked in blue, where the street layout creates conditions for rat running.

Transport for London would like to transform these areas into emergency low-traffic neighbourhoods – places where councils could quickly install low-cost objects such as planters to remove rat-running motor traffic. To make it happen, local councils need to bid to TfL for the money, but many will only bid if they feel the scheme has local support.

Will people get excited enough about low traffic neighbourhoods to ask their councillors for one? While the concept is great, the term itself is about as appealing as ‘low-calorie diet’. You don’t immediately think “that sounds nice”. As a low-traffic neighbourhood is almost identical to a street park, I wondered if the term ‘Street Park’ would work better. The only way to find out was to put it to the test.

Based on the rat-running areas TfL has identified in Ealing, I’ve mapped out 13 potential ‘street parks’. On average, it would require about five bicycle filters and one bus filter to create each of these areas. That’s about 200 planters – not a lot of money to reduce pollution for thousands of people.

While street parks have lots of benefits, it’s important to acknowledge their down side. The modal filters that remove rat-running traffic can make some car journeys longer for residents. In the past, this has been a major objection to low-traffic neighbourhoods. However, after experiencing the joy of quiet streets in the last two months, many people don’t want a return to busy roads.

In the past few weeks I’ve presented this idea to several different groups, and the reaction has been overwhelmingly positive. People immediately get the idea of street parks. Why wouldn’t you want a park in your area? I’ve also sent it to my local council. At the time of writing, I hear they are bidding for at least two of the schemes, hopefully they will bid for more. The results of these bids will be announced around 18th June and there will be be a further funding opportunity for councils judged to have used the initial funding well.

TfL is aiming to fund street parks (‘low-traffic neighbourhoods’) all across London. So why not ask your local councillors for one in your area.