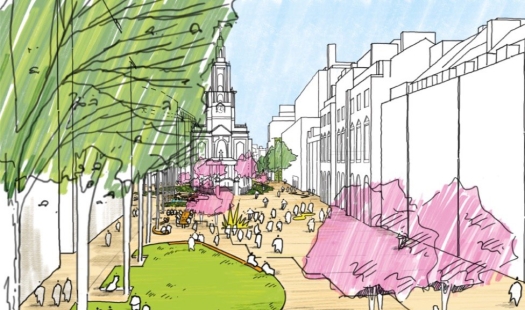 Westminster City Council has unveiled ambitious plans to transform the busy area around Aldwych and the Strand, making it a safer and more attractive place for people on foot. Our response is below and here.

We are pleased that the City of Westminster has taken this opportunity to create a people-friendly space and undertaken the removal of almost all vehicular traffic and access from the Strand East area.

Our concerns are that firstly the plans do not include provision for a safe, segregated cycle route around Aldwych, and secondly that the scheme should fit better with the Vision Zero approach to road safety and design neighbouring roads and streets to a 20mph speed limit.

To what extent do you support the objectives for this project (listed below)?

Do you have any views on the overall concept designs?

London Living Streets is overall supportive of these proposals and in particular the Strand East closure to all through vehicular traffic. We believe this scheme has the opportunity to be a significant location for London both for those who work and study around this area and the huge numbers of visitors to Somerset House, St Mary-le-Strand, Covent Garden and the river. We are pleased that the City of Westminster has taken this opportunity to create a people friendly space and undertaken the removal of almost all vehicular traffic and access from the East Strand area. This has to be applauded as a major step forward not just for this location but in terms of how the City of Westminster views the locations of London-wide and national significance that it is home to. Our concerns about the scheme and the opportunities for improvement largely relate to the road around the Aldwych. We believe that there are opportunities to align proposals for those roads better with Vision Zero and Healthy Streets policies and most importantly to create a slower and safe environment for people on bicycles and on foot. The omission of a safe segregated route around the Aldwych for people on bicycles is regretted and we believe that with careful thought such a facility can be created; the omission of fully protected space for cycling on Aldwych has the capacity to seriously reduce the amenity of the scheme owing to the likelihood of building in potential conflict between people on foot and people cycling on Strand East.

Do you have any comments on air quality?

We are pleased to see the dramatic improvements to air quality as outlined in section 3 of the booklet and view this as a core part of the appeal of the proposals. It is clear that the reduction of vehicular movement and access when combined with changes such as ULEZ can have a major impact on this problem. This is again a potentially useful insight for other locations in the City of Westminster.

Do you have any comments on improving spaces and places?

We propose that the pedestrian crossings to the north of Waterloo Bridge are 10 metres in width rather than 6 metres to comfortably accommodate the large number of people walking along the Strand and into/out of Covent Garden.

Where car parking is proposed (and we would very much hope that it is minimised throughout the scheme) and when not in use, it should be able to function as footway for pedestrians. We feel that if this remaining parking is what is standing in the way of creating segregated and safe cycling provision, then it should be removed from the Aldwych itself.

Any designs for the public space should enhance and not detract from the great architecture, especially St Mary-le-Strand and Somerset House. We are very much in favour of the creation of more greenery but there is a tendency to plant trees where they will grow up to obscure fabulous buildings; this should be avoided in this location.

Do you have any comments on supporting the local economy?

We feel strongly that these proposals will be a significant filip to the local economy, businesses across this area and a major boost for the City of Westminster overall (as it embraces people friendly environments). We would commend the recently updated Living Streets report The Pedestrian Pound –  The Business Case for Better Streets and Places to the City of Westminster (https://www.livingstreets.org.uk/media/3890/pedestrian-pound-2018.pdf). This indicates that footfall and spending are likely to be boosted by a minimum of 30% in people friendly locations.